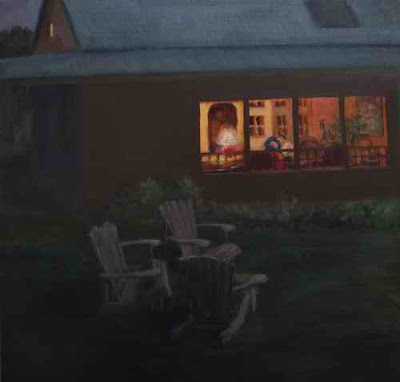 “Moonlight Chairs” 12 x 12″ oil on canvas $750
Obviously I’ve not spent much time with this blog after the big computer blitz in September.

Does that mean I have been painting? Actually, yes, but mostly on canvases I started some time ago and now need to finish. Dennis and I have a show together in January at Clatsop Community College in Astoria so I no longer have the luxury of just thinking about finishing these paintings.
I will post them as they are finished but I’m guessing that won’t be until after Christmas. Someone asked me once when I decided a painting was finished and I said “When I run out of time.” meaning the show deadline. And then, if I get them back after the show, the answer is “When someone else owns them.” This is one of the things I really like about painting as opposed to ceramic sculpture: if I still have the canvas I can keep working on it.

This summer my two faithful students and I postponed the last two scheduled classes and we made them up this fall. To stretch us all a bit I suggested that we each do a painting in the style of an artist of our choosing. 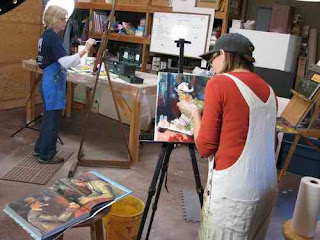 Tana decided to do a copy of a Cezanne and was surprised at how much she liked a looser approach which she applied to her own subject during the next class.

That’s my painting in the style of Edward Hopper in the background, far right. The finished piece is at the top of this blog and will be on the announcement card for the January show. With little editing, this is the scene we see when we leave our studio at night and head to the house. If the lights are on it glows like a lantern and the scene inside is something Hopper would have appreciated, I’m sure.

Adrienne chose to emulate van Gogh and got to understand a bit better why using only small, repetitive brush strokes can produce a squirmy can o’ worms. Taking a digital black and white photo helped her see how all the values had blended into mid-range. Look at the difference after the second class! She’d want you to know it is not finished… 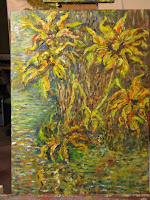 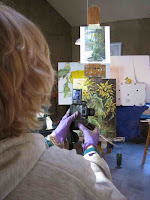 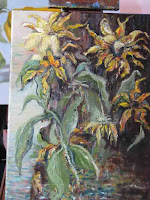 ( in case anyone thinks you know her, this IS Adrienne King, scream-queen star of the original Friday the 13th movie which I never saw, and never intend to see.)